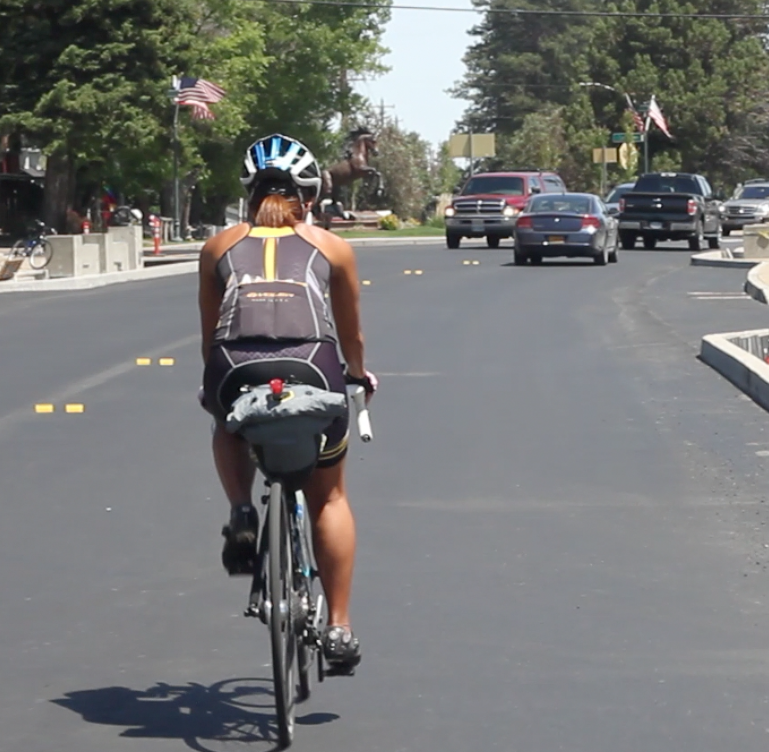 “It is by riding a bicycle that you learn the contours of a country best, since you have to sweat up the hills and coast down them. Thus you remember them as they actually are, while in a motor car only a high hill impresses you, and you have no such accurate remembrance of the country you have driven through as you gain by riding a bicycle.”

I rode my bicycle across America from June to July this year, fell deeper in love with the sport, and now I ride every weekday to work and home.

During my hour-long commute on my bicycle in rush hour traffic, I get this nagging thought – it’s probably safer to run than to cycle. At least when I run, I do so on the pavement, and not on the road shoulder, neck-to-neck with bigger, faster, meaner cars.

Here’s a short 1-min video on the sights I encounter on my daily commute along a heavily trafficked road:

Yet this article in BikeRadar, a reputed and respected online cycling resource, contradicts my perception:

Per mile, more people get killed walking than cycling according to the UK’s National Travel Survey and you’re more likely to suffer an injury requiring medical care while gardening than on your bike. Cycling is statistically safe. “Per year, there are 10 to 15 fatalities due to people falling off bikes with no other vehicle involved,” says safety expert and co-author of Health on the Move, Malcolm Wardlaw (here’s his commentary to the New York Times in 2001 explaining his belief on the over-rated risks of cycling compared to driving).

Two and half weeks after I returned from my cross country cycling race across America, I cycled in the treacherously hilly and heavily trafficked city of San Francisco. But I wasn’t alone to maneuver the narrow streets amidst impatient drivers who show little tolerance or respect for cyclists. I tailed my friend closely – he has lived in San Francisco for over 14 years and has ridden his bike in the city for 12 years. His advice for riding in the city? Be confident and be aggressive; cycle like you’re a car, because if you are meek, cars will not give way to you.

I noted his words and etched them to my mind, so that every time I cycle, I drew from his words like a well-sharpened sword, ready for the battlefield.

Still, I can’t help but think about my safety as I commute to work five days a week, an hour each way.

And so I decided to investigate. My research let me to a few fascinating finds:

Why are UK cyclists and would be cyclists so paranoid about safety? “Minority status generates fear,” says John Franklin, cycling skills expert and author of Cyclecraft. John agrees that the perception of cycling risk doesn’t match the reality.

“It’s about the management of risk, not simply the fear of risk.” As a cycle commuter, managing risk means being assertive, and behaving like traffic so that others will treat you as traffic.

“Cyclists need to learn how to influence others on the road,” says Franklin. “What you try to do is ride in a way that deters other people from starting to put you at risk. If you’re coming up to a side road where quite a lot of traffic turns left and there’s someone driving harshly behind you, there’s a good chance he’ll try to overtake and cut across you to turn left. So you ride in a way and place that if he does do that, he’s forced to make a much wider movement to give you more space. And it makes the manoeuvre more difficult for him, so he’s less likely to do it.”

“Good positioning is key. Position yourself as a driver with the rest of the traffic, not hugging the kerb. The ‘primary position’ is in the centre of the moving traffic lane. You’re obliging others to acknowledge you as another user of the road and not someone they can ignore. You’re causing them to think.” (source: BikeRadar)

Also, mix up your routes. Choose several routes to your workplace and rotate them. Riding the same stretch of congested road every day will make you complacent at junctions and possible hazards. Being aware that you’re going to encounter dangerous areas such as merging lanes and busy bus stops will help keep you aware of your surroundings. (source: Men’s Fitness)

In Portland, Oregon, a quiet cycling revolution is under way. There are now more transport journeys by bicycle per capita in Portland than in any other large American city. A journalist there told me that a turning point in the safety of cyclists on the roads comes when everyone who drives knows someone who cycles: it could be your neighbour’s daughter or a work colleague on that bike, which influences how you drive. The more people that cycle, the closer we get, and the more legitimate the campaign for safer cycling becomes. (source: The Guardian)

According to safety expert and co-author of Health on the Move, Malcolm Wardlaw, “the most effective means to improve cyclist casualty rates is to increase the number of cyclists on the roads.” (source: Commentary)

I agree. In California, pedestrians are king. Without raising an eye or hand, cars would come to a halt, or if extended too far out into a pedestrian’s path, would backtrack, as a sign of utmost respect for the pedestrian.

I believe the only way for drivers to look out for cyclists is when there are more of us on the road. There is safety in numbers, and safety in normality. When the sight of increasing cyclists on the road becomes a norm, drivers will be careful and watchful for cyclists.

And so I continue to ride frequently, marrying cycling with daily life, which in Californian terms, involves lots of roads, traffic, the redwoods and cafe chillin’.