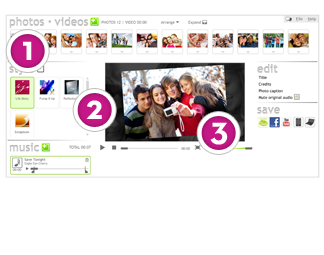 10 years in the making, we are very excited to finally announce our first ever photo slideshow software for Mac. Directly from the Desk of the CEO, we wanted to tell you what went in to this product and why we are so happy it’s finally here.

Many at muvee are Mac-heads, but when muvee started nobody was even sure Apple would continue to make computers…, so we started down the path of developing on the Windows OS. We felt that PC users could really use an elegant solution to creating and sharing life’s precious moments digitally. We released muvee autoProducer to great reviews in 2001, and continued to add features with new releases almost annually. In 2006, we embarked on creating a brand new platform which moved away from using Microsoft’s DirectShow and DirectX platforms (on which muvee autoProducer was based on), to one that uses OpenGL (which muvee Reveal was based on). OpenGL is a cross platform technology, which was our first baby step towards fulfilling a 10 year dream to have our ideas working on the Mac platform.

Sometime in 2009, due to overwhelming requests from many of our users and also from our OEM partners, we finally took that big step to port across our core Artistic Intelligence engine and our video rendering platform we call mES (muvee Editing Services) to the Mac platform. We estimated this to be a 4-6 man year-long project as now, muvee Reveal X has 10 years of innovation and features built-in.

But we did not want to just build a Mac version of muvee Reveal. But rather, we wanted to learn from feedback we have garnered over the years from our millions of users and start with a clean slate. Our brief to the engineers and product designers was simple: knowing what you know now about automatic video editing, how should an application on a Mac work? Many ideas were generated. Many conventional wisdoms of earlier versions were debunked. We tested many usage models, and took our time to distill and reduce them until we had the purest and simplest form of automatic video creation we could build.

muvee Reveal Express for Mac is the first release of this effort.

For muvee power users familiar with our latest and greatest, you will recognize a few features, but also will miss quite a few others. This is afterall, a first version of muvee on a Mac. But one thing’s for sure: we will be putting out new features and playing catch-up real quickly.

Some notable differences in user experience:
In the Windows version, you have the preview screen and media panel (where you choose your set of photos to be used) all on one

screen. We realize this is very distracting in many ways to some people. So in the Mac version, you have two screens: your Media Panel (where you do the hard work) and the Preview Screen (where you sit back and enjoy the show).

Starting with your Media Panel, you choose your photos and hit Play. We immediately analyze them and make you your first muvee with the default style and music. In the Media Panel, we also visually show you the result of our Photo analysis stage, where we highlight people’s faces, or other areas of interest that we have detected. From this screen, you can immediately grab the shaded area of interest and move it around. Maybe you did not want to focus on the face in the photo, but rather focus on the car behind the person. You don’t have to go to each photo and fire up the magicSpot feature.

In the Preview Screen, you can control your muvee easily. Quickly change to a different Style (and each Style will come with recommended music) or choose your own Music via your iTunes collection. A new mode in the Mac version is the Pace button. (icon of a man running). In the Windows version, each Style has a control called Pacing, but you had to click Style Settings to change it and then exit and preview your muvee again. In the Mac version, we place the Pacing button right on the preview screen. Just scroll it along and the software will know how to react accordingly. This is directly from feedback from users: some wanted a faster paced muvee, whereas some people felt that they want to linger on each photo for longer. So we placed the control right where you can reach it. Regardless of your setting, it will still respect the natural rhythm of the music track you have chosen, so everything is still tight and professional. A slower Pace will see us cutting after a few beats instead of on every beat.

We have also radically simplified the Output options. Given the ecosystem in the Mac family of products, you can send your muvee to iDVD to author a DVD, or you can save it for your iOS devices. We will then include the file in your iTunes so that it will sync to your device upon your next connection.

What has remained is the simple user experience, clean interface design and the same exciting Style templates that are available on the PC version. You can expect many of the PC features to be re-imagined for this photo slideshow software for Mac in time to come.

So go to the Mac App Store now and get it!

We’d love to hear what you think!