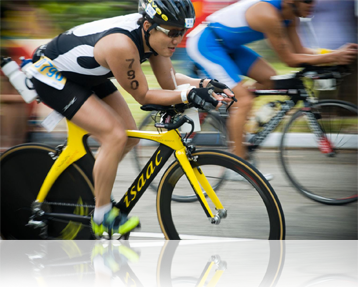 Last month, our CEO and Ironman triathlete Terence Swee attempted the iconic Escape from Alcatraz Triathlon with 3 GoPros in tow.  This is his story:

The Escape from Alcatraz Triathlon is one of those bucket list races for many triathletes. It   was also my first race in San Francisco and my first time swimming in the 55° F bay.  I tried on my rental wetsuit and dipped in the bay for the first time the day before the race.  In the month before the race, I had a packed travel schedule: New Orleans, Singapore and then Taiwan.  I didn’t have a chance to train because I also sprained my ankle in New Orleans.  So I knew this was going to be quite an experience!

I wanted to make sure I didn’t miss any of the action so I thought, “there is no better way to do that than to record the entire race using a Point of View camera, so that all my triathlete friends could experience the race too.”

Race morning 5:30am:  Got to Marina Green, racked my bikes, and got my transition area ready.  Then we took a shuttle to Pier 3 where all 2000 athletes boarded the San Francisco Belle for a one way trip to Alcatraz Island.  GoPro No.1 starting rolling.

7:30am sharp: The horn went off, and 2000 bodies plunged into the freezing cold San Francisco Bay waters within 6 minutes.  I took some videos while in the boat, interviewing some athletes for my movie, and then quickly strapped it onto my improvised GoPro chest harness, which I wear low on my lower back.

Upon jumping in, the initial shock of the cold really gives you an adrenaline jolt.  I swam as hard as I could to generate body heat.  My face was so cold, I felt like the wind was being knocked out of me.  Nevertheless, I stopped midway in the bay for about 30 seconds, took out my GoPro and got a 360 panoramic video of the San Francisco skyline, Alcatraz behind me, and the Golden Gate Bridge.

8:45am: Due to the strong currents, I ended up almost a mile West of where I needed to land.  Got out of the wetsuit, ran to my bike, and turned on GoPro No. 2. which was mounted on my seat post.  Off I went on the 18 mile bike ride.

10am: Got back to the bike transition area, and turned on GoPro No. 3 as I got out of my riding shoes and dressed for the 8 mile run.  I hand carried GoPro No. 3 as I ran  on the beautiful course, waving to fellow participants as they passed me, filming them, and the scenery.

11:30am: I crossed the finish line, filming the entire last 100 yard jaunt through the spectator’s chute.  There were supporters cheering, and I spotted my wife and friends.  It was a great feeling to successfully Escape from Alcatraz!

And that was the fun part……

When I transferred all the videos from the 3 GoPros to my PC, I had accumulated over 8 hours of HD video!  The GoPro used on the swim had over an hour of video pointing at the sky as I forgot to switch it off when I started off with GoPro No. 2 for the bike segment.  The GoPro on the bike had almost 10 seconds in front where I was fumbling with the camera making sure the record mode was set.  So there I was heaving and breathing into the lens trying to figure it all out.  And then the rest of the hour was just endless views of me riding…not that interesting…but I remembered there were supporters who ran behind me in Cookie Monster and Superman suits that I wanted to keep.  The rest was just scenery of rolling hills that I could skip.

I knew I needed to look for a video cutting software I could download and use immediately.  The video quality captured by the GoPro line is excellent, so I didn’t want to lose even a single pixel in any of the video segments I wanted to keep.  I also didn’t want to spend time transcoding my videos to another format before cutting. I quickly discovered such a product does not exist.  So I called the team in Singapore. And we built it.